My recent release, Summer Sky, is the first book in the contemporary rock romance series ‘Blue Phoenix’. This is an interview with two of the band members that I wrote for the 2014 Romance Blogfest hosted by My Crazy Corner and omitted to send  *sigh*. Check out all the posts about talented romance authors over at the blog: 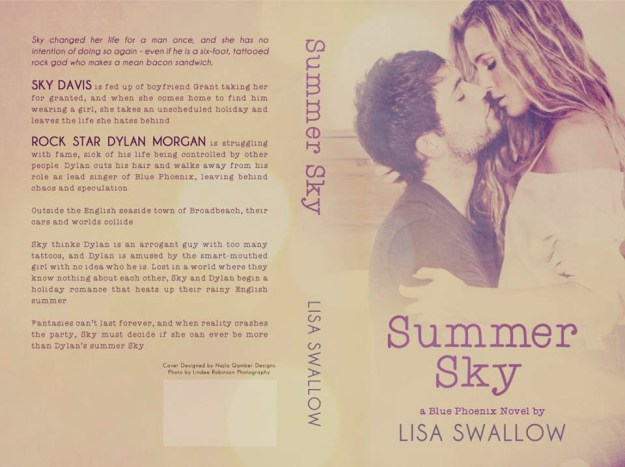 Dylan Morgan sits in the chair opposite, clearly not wanting to be here. Once over, interviewing Dylan would have led to a mix of nerves and excitement, his reputation back then suggested the possibility of more than an interview for anyone who caught his eye. This Dylan is guarded, and I’ve been instructed not to ask too much about the last few months. Guitarist Jem Jones is with us too, hidden behind dark sunglasses, glass of whiskey in his hand. The tension between the two is thick in the room. Wish me luck…

Me – Thanks for agreeing to the interview. How are things going with the new album? Should we expect more of the same from Blue Phoenix or is this a different direction?

Jem – We’ve had a delay (looks at Dylan) but we’re on track to release around August. Yeah, some more of the same but some new sounds too. We had some guest vocals from Danni-K and a new producer so I don’t think anyone will be disappointed.

Me – So kicking off another tour next month? It’s been over a year since you last toured. Excited?

Dylan – Big tours are tough. We spent three years solid touring and yeah, I don’t enjoy it as much as I did. But necessary evil I guess *laughs*

Jem – I see it as why we’re musicians – to perform and connect with as many fans as we can.

Dylan – Yeah, I get that Jem but we don’t all get the same things out of touring as you do.

Jem – Hope you can make it this time…Not planning any more vacations?

Me – I sense a bit of the famous Dylan and Jem tension around. Having issues around the musical direction of the album?

Jem – We just got issues *laughs* but what fun would we be without them?

Me – So, Dylan. A new look with the short hair. What made you go for an image change? A lot of your fans were shocked!

Dylan – I’ve had long hair since I was sixteen and didn’t recognise myself anymore. I figured a change might help.

Me – We all worried about you last month when you disappeared. Everything okay now?

Dylan – I needed time out.

Me – And the world still wants to know about the girl who stole your heart while you were away.

Dylan – Didn’t you get told I’m not talking about my personal life? She’s nothing to do with the band or the music.

Me – We saw you talking about her on Twitter and we’ve seen the pictures. The world wants to know if she’s still in your life?

Dylan stands and walks to the window, back to me and I realise I’ve pushed things too far. But I had to ask, I’d be in trouble if I didn’t! The whole world wants to know who captured the unattainable Dylan Morgan and where she is now.

Me – My apologies, I think the fans just want to know if Dylan Morgan is still on the market. We already lost Liam to Honey.

Jem – I’m still around if you’re looking, sweetheart. For now. I don’t think this Sky chick wants anything to do with him. Why would she once she realises who the real Dylan Morgan is?

Dylan swears at Jem under his breath, glances at me then storms from the room bringing the interview to an abrupt end.

More details about the band can be found at: