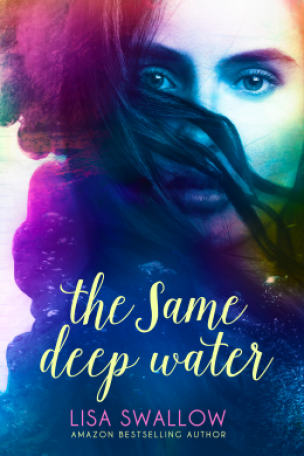 Guy. Dimpled smile. Body of a surf god. Smart and funny.
Running out of time.

We became travelling companions through life, ticking off items on our bucket lists. I’d hidden from happiness for years and kept my life under strict control.

Guy showed me how to step into the world and experience more. He brought light into the shadows and helped me through the darkness.

I thought I could cope with our uncertain future, but Guy has a secret which changes everything..

Sometimes, believing the lies we tell ourselves is easier than dealing with the truth.

The Same Deep Water is a standalone new adult romance set in Australia. A man sidesteps the group and heads toward me. I recognise Guy’s gait but until he reaches me, he’s indiscernible from the crowd. Guy’s white mask obscures half his face, but his strong jaw and full mouth are visible still. The well-cut black suit jacket is unbuttoned, a grey shirt with bow tie beneath.

Guy looks a hell of a lot hotter out of his boardies and the control over my attraction to him loosens further.

A low whistle accompanies Guy’s appraisal of me. “You scrub up well.”

“Nicely put. You’re not quite Prince Charming then?”

“Not if you’re Belle.” He crooks his elbow indicating I should place my arm through his.

“You’re wearing gold which is closer to yellow. Beauty and the Beast.”

“I’d hardly call you a beast.” I hesitate over whether to take his arm or not.

“There are so many inappropriate responses I can give to that comment and won’t.” He pauses. “I’ve told you before, you’re beautiful.”

I blush like a teenager beneath my mask and heavy make-up. “Thanks.”

“Not just tonight,” he says softly.

I hastily change the subject. “You look very different in a suit.”

“I’m never sure whether you’re serious and in love with yourself, or if you’re joking.”

“Ah, a bit of both.” He gestures again for me to take his arm.

Every day I touch new people. Shake hands with clients, am jostled by people on the way to and from work, but until now I didn’t realise I’ve avoided touching Guy. When we first met, his touch would’ve pulled me away from the edge and taken away control of my body and decisions.

As I link my arm through Guy’s, a finality strikes, too. The distance I’ve tried to maintain, the illusion our only connection is a night of my life I refuse to see as part of myself, retreats as we connect. His arm is warm against my bare skin and the curve of his bicep beneath the expensive suit doesn’t escape my attention either. Caught in the romance of the setting, the nervous fluttering in my stomach switches to desire for Guy’s touch. I resolve to limit the amount of alcohol and physical contact for the evening.